But There is No Land Near the End 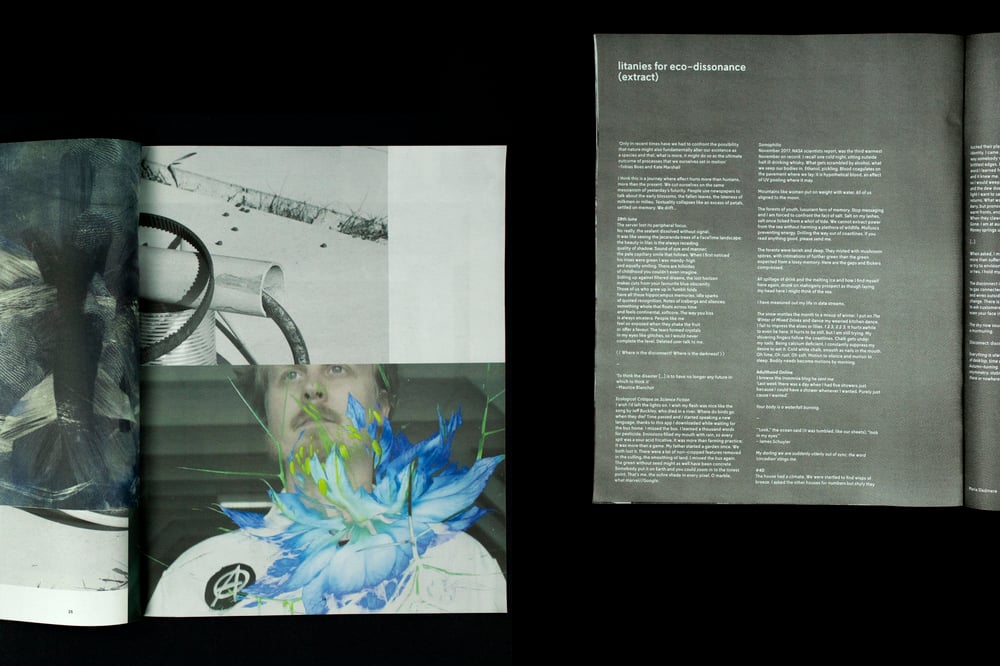 But There is No Land Near the End is a publication containing work by internationally based contemporary artists, poets and writers whose practices respond to the proposed current geological epoch of the ‘Anthropocene’. The works respond to the varying levels of disconnection that define our ways of relating to the non-human, exploring topics such as nature deficit disorder and collective denial.

The artists and writers included in this publication explore the possibility for alternative trajectories and modes of being through their practice, reflecting on relationships between human bodies, technology and the environment, as well as challenging pervasive notions of progress and development.

Bastian Theusen’s "Physical Evidence of Abstract Events" highlights the malign contradiction of the phone as a device that has the power to both inform and mobilise yet also distract and paralyse. This disconnection between our online behaviours and physical experiences is further explored by Ava Williams’ piece "Reality vs Virtuality". Placing comments she found online in relevant outdoor spaces, she reveals an untethered fetishisation of digital escapism that is at once both jarring and enchanting. Richard Carter’s "Waveform" series uses algorithms to generate poetry from aerial drone footage of tidal movement, exploring how nonhuman phenomena are represented and articulated through technology. This publication borrows its title from one of Carter’s poems, which looks at the shifting relationships between ocean, coast, climate and the future impact of those changes.

While Anne Mie Bak Andersen’s photographic series Plastic Planet acts as a detached,
voyeuristic depiction of the spectacle of capitalism, Barbel Praun’s "Impermanent Sculptures (of indestructible Objects)" directly engages in an interrogation of our consumerist waste mentality. Through the immediacy of her lens, she reclaims discarded waste by forming it into fleeting improvised forms, questioning ideas of value against contrasting time scales. Mari Keski Korsu’s radical experiment interspecies Bog Communication attempts to overcome the disconnect we currently experience in relation to the environment; volunteers physically immerse themselves within the landscape of a peat bog and begin to lose their sense of self, entering a meditative, hybrid state of being.

This notion of hybridity is expanded through the way each work is placed in conversation with the others, with each voice and perspective coming together to form a mutated whole. The concept for But There is No Land Near the End takes its inspiration from the publication’s own title; the works begin small and are scattered amidst vast expanses of white space on the page, and with each new spread the images swell and jostle for room until they begin to overlap. White space, here symbolising landmass, disappears as the figurative sea levels begin to rise – claustrophobia ensues. The layout is used to disrupt the process of looking, creating unexpected associations between works with the aim to promote new ways of seeing and making connections.